The news forecast reports that the winds are below 10 mph this morning, but will pick up to 15 -20 by later afternoon. With no rain in sight, the engines start up on the 24-foot whaler as the smell of sunscreen becomes prominent in the air. After a short ride across a calm Great South Bay, the anchor is thrown on the shores of Fire Island. Grabbing a peanut butter sandwich and a surfboard he heads down to the ocean to make it on time for work.

This is what a typical morning is like for Fire Island ocean lifeguard Billy Swezey. This is his 10th summer guarding the shores of Fire Island in the town of Atlantique. Growing up summering in such an amazing beach town got him addicted to the sun, and all the activities that go along with it. He’s an all around waterman, and knew how to operate a boat before he could drive a car. He has been surfed since he could walk, stand up paddle boarded since high school, sailed in the open ocean, and kite boarded all along the Great South Bay.

Billy enjoys these activities so much he decided to chase summer, make it his everyday life style, and turn it into a career. Three years ago Billy decided to buy a sailboat and make it his traveling home. It was a 1977 Victoria Frances 26′ named “Tula” that needed a lot of work. After weeks of renovation, Tula was up sailing in the Great South Bay. 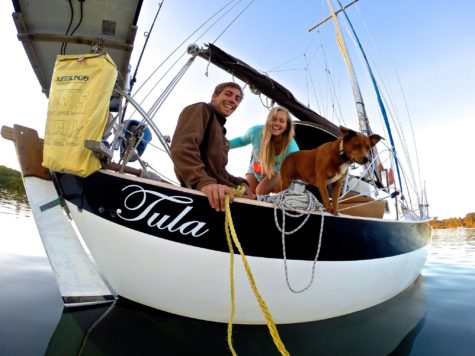 At that time Billy had no sailing experience, but was determined to sail down south to the warmer weather. With a couple weeks of practice, sailing around Long Island, Billy set sail with southern Florida as his destination. Leaving in November of 2013 it took Billy two and a half months to reach Jupiter, FL.

Jupiter became Billy and Tula’s new home. His love for water sports drove him to make it into his career, so he would never hate his job. With this in mind he started giving kite-boarding lessons, and soon joined the team New Wave Kite Boarding in Stuart, FL.

Billy is a very skilled kite-boarder, but the sport takes many years of practice. Kite boarding is like wake boarding, but uses a kite instead of a boat moving forward to keep the rider upright. The tricky part is learning how to concentrate and control the kite while it’s pulling across the water.

Billy’s move to Florida did not keep him from coming back the past two summers to continue his lifeguarding career on the shores of Fire Island. New Wave Kiting also made it possible for Billy to continue doing what he loves even when he is home for the summer. His boss at New Wave sent Billy home with three brand new Kites so he is able to teach more Long Islanders how to kite in the Great South Bay. Billy claims that the flats in the middle of our bay is the best place to teach kitting, even better than Florida shores.

Billy’s adventures are far from over, and he’s doing what he loves. Billy plans to keep lifeguarding, and kite-board instructing for as many summers as he can. He also plans to camp his way down South America next year with Patagonia set as his final destination.

Email Kirsten at atlantique@fireisland-news.com with any news and happenings you would like her to include in her next column.