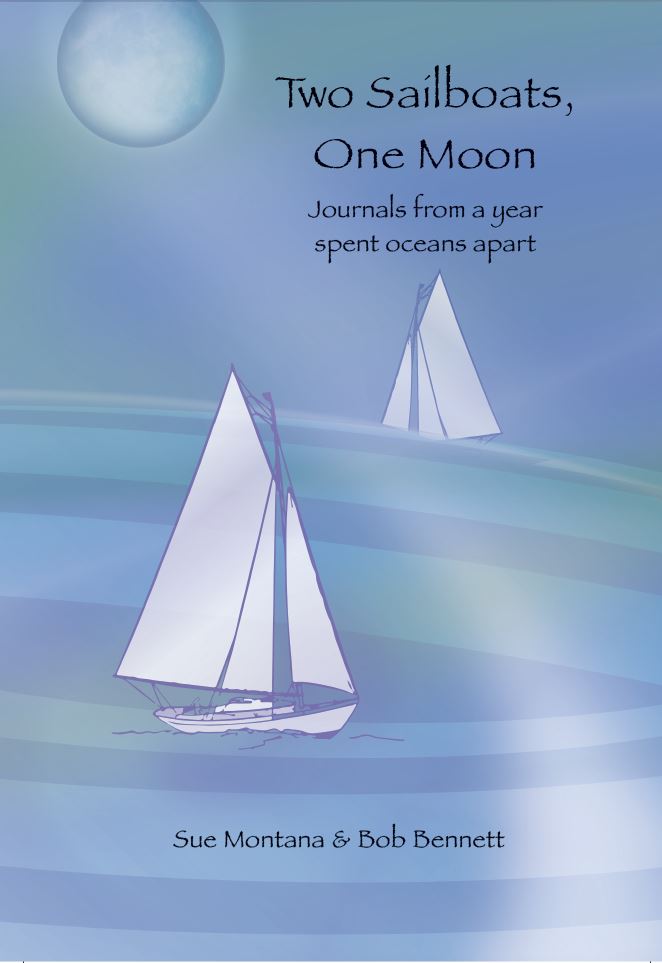 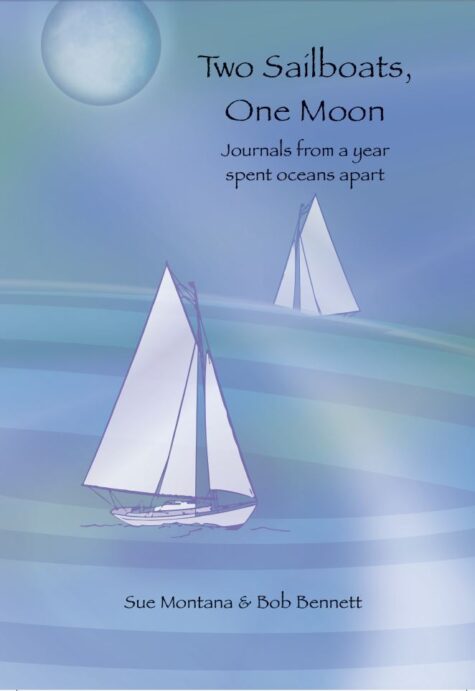 A warming sun, a cloudless sky, waves lapping softly up against the side of a boat – a lovely image. But the water itself? Actually being in it or on it? Not so much! So it was with a bit of trepidation that this landlubber took on a book about sailing. I needn’t have worried; I got an honest look into the lives of Bob Bennett and Sue Montana,

a very committed couple, and a primer on sailing to boot. Starting out in Patchogue, the seasons running from summer 2002 to spring 2003, “Two Sailboats, One Moon,” is told in alternating chapters. Bob’s daily log records his year-long round-the-world sailing voyage as part of a three-man crew, while Sue’s journal documents her time at home while he’s on the high seas. The moon in the title becomes “a soothing anchor” for her, “refreshing and entertaining, yet rock solid reliable,” – like Bob perhaps? One wonders, as she contemplates it each evening and thinks of him on his sailing ship. Not just about jibs, mainsails, and low-torque grooves, “Two Sailboats” tracks the ins and outs of their relationship and the challenges they face. “It’s like my experiences aren’t validated until I share them with her,” Bob notes in his log. Often feeling “lonely and insignificant,” Sue laments, “wanting to scream … all everyone ever wanted to talk about for an entire year was Bob … To hell with Bob, what about me?” Managing life at home, “paying the bills, filing taxes, maintaining a house, a yard, a boat, cars, cats, computers, social and family life …” and a move to living full-time on their sailing yacht, “Habanero,” Sue worries she won’t “be able to hold things together …” She holds together just fine, discovering strengths she never knew she had, among them, getting a new business off the ground, learning to captain “Habanero,” even repair it. All this is new for her, but she tackles each job with gusto. There is also a touching passage about coping with the passing of her beloved cat, Maxx. To be apart for a year, is an arrangement that puts new meaning to the term giving one’s partner space. They do see each other three times and speak by telephone on Monday mornings, but still it isn’t a decision many couples would be willing to hold to. However Bob and Sue are not many couples. Together for 17 years, their “five-year renewable contract” allows them to decide if they want to “hang out” for another stretch.

Hanging out on a sailing yacht, I learned, doesn’t include kicking back in your docksiders and sailing whites, tossing down Mojitos. Repairing a burner on a gas stove is a day’s project. How about fixing a steering line with a 25-knot breeze coming at you? Or mending a gaping hole in the staysail, which includes cutting and gluing strips of sailcloth over the rips, sewing the strips together on a foot pedal sewing machine that requires all parts sanded with an emery board, and an oiling with WD-40? Tackling these little maneuvers with those near-gale winds coming at you, causing the sewing machine and the sailors alike to slide “downhill off the dinette table,” where this little fixer-upper is taking place.

For this land-locked reviewer though, the direst of hardships would be to sleep on the same sweaty sheets for a week because the salt water tank refused to function — sailors don’t waste filtered water on their wash. Bed Bath & Beyond where are you!

Sue had her own troubles with boat keeping. “ ‘Habanero’ is a mess,” she writes in her journal. “There’s mildew … in all the corners. The decks are dull. The cockpit cushions are filthy …”

Like every adventure, no matter the challenge or the excitement, this one came to an end, and with “the buzz … beginning to subside,” it was time for Bob to face up to the “What next?” question.

For him, it’s back to the work he left as a software engineer, but 10 years down the road — or shore — closer to retirement age, he wonders if it will be “the life of other cruising couples… sailing from port to port, or maintaining a domestic life?” In contrast, Sue doesn’t weigh in on the what-will-be. She tends more to reflecting on the many things she “was able to figure out … through trial and error, or research or asking questions,” and the “tremendous confidence” she gained fending for herself.

I for one would never argue with a gal who served as commodore of the South Bay Cruising Club in 2012 and 2013. In fact, I’ll have that Mojito now, and raise my glass to Sue, and Bob. May you have fair winds in all your travels.

This article was originally published in Fire Island News on June 15, 2015. This publication is still in print, and available for purchase at twosailboatsonemoon.com .