After years of commuting to and from the beach by ferry, the process tends to become fairly streamlined, maybe even mundane. Parking arrangements, the process required to transport freight and bikes, decisions to sit inside or up top, just like my regular commute to work by car, each trip is much like the last.

Sometimes, however, after missing a boat by five minutes or lugging packages on foot or realizing I left something in the Maple Avenue lot, I wonder what would be different if Robert Moses had had his way. As Long Island state park commissioner, Moses began a push after the devastating hurricane of 1938 to construct a parkway from what is now Robert Moses State Park east to Smith Point County Park, bisecting all the small communities of Fire Island. Billed as a means of protection from storms and ease to transportation, here in Ocean Beach the highway would have been built on top of the dunes. Driving 55 miles per hour down the beach, one could have reached Ocean Beach from the Robert Moses Causeway in five minutes.

When development began here in town in 1912, before the advent of highways and when the automobile industry was in its infancy, most of Long Island was rural with small towns interspersed throughout. The Long Island State Parks Commission did an efficient job building highways to connect their parks – but they also succeeded in rapidly changing the face of Long Island as a whole. I believe there is significant value to the fact those who called Ocean Beach home in the early decades of the 20th century would almost surely recognize it today.

Just as Fire Islanders confronted threats to their quality of life in the 1950s and 1960s by helping to establish the Fire Island National Seashore, today’s residents are continuing the discussion. In a swift change of policy, Mayor James Mallott and Fire Island Ferries President Tim Mooney announced in a joint statement on Wednesday, May 31, that all 1 a.m. ferries out of Ocean Beach and Ocean Bay Park would cease to run. The move came after years of escalating tension involving disruptions from passengers making use of the late-night ferries.

In speaking with folks in town, reactions were largely in favor of the change. Some voiced concern about visitors being left behind, unaware that later ferries would not run; the village had actually requested the addition of late ferries 19 years ago to alleviate this problem. A few store clerks who commute back home on earlier scheduled ferries voiced concern that those unruly passengers would now be riding their boats instead. However, the feeling of many others is that this is an appropriate wake-up call, and perhaps even long overdue.

In other news, the ferry basin refurbishment project is virtually complete and came in underbudget by $800,000, allowing those funds to be used on other ferry-area improvements with FEMA approval. Additionally, much progress has been made on the new well house on Surf View, the foundation of which is nearly complete.

This year, the Woodhull School will be graduating four sixth-graders, who will be moving on to Bay Shore Middle School in the fall. In addition, District Clerk Donna Clock tells us four pre-kindergarten students are moving up, and three students from the Fire Island School District are graduating from Bay Shore High School. This year’s graduation ceremony at Woodhull School will be held on Tuesday, June 20, at 6:30 p.m., and will be accompanied by a musical performance by the students.

The Ocean Beach Police Department is pleased to announce the hiring of two new officers, Nick Accardi and Anthony Mkwanazi, who began active duty on Friday, June 2. Anthony is the son of long-time officer Mark Mkwanazi, who passed away this past February. The community wishes you both success on the force.

Fire Chief Ian Levine would like to thank readers for their support at the blood drive held at the firehouse on Saturday, May 27. More than 50 donors participated. Chief Levine also reminds residents to replace batteries in their fire and carbon monoxide detectors as they return to the beach this season.

The Ocean Beach Association held its last meeting on Saturday, May 20, and will conduct its summer meeting at noon on Saturday, June 17, at the Community House. The O.B.A. will be hosting a flea market and bake sale on the ball field on Saturday, June 10, from 10 a.m. to 6 p.m., to benefit the Ocean Beach Community Fund, with a rain date of June 11. Spaces are available for $25, and donations of items for sale will be accepted. For more information, call Gail Stamler at 516-312-6774 or Blair Burke at 631-219-1052.

OB Village Hall and the post office are busy once again after a quiet off-season. The village office would like to remind readers that the first bulk garbage pickup day is Wednesday, June 17. Up to two large bulk items may be left at the curb on each pickup day. A request form, available at the village website (www.villageofoceanbeach.org), must be submitted if you wish to have bulk items taken. The staff in the office is also abuzz over Kelly McDermott’s upcoming baby shower, also on June 17. Congratulations, Kelly!

We all would like to congratulate Zack Goldberg on his graduation from law school. Much luck as you move from the Trangleball court to the courtroom. It is a little-known fact that the first female instructor in the Federal Life Saving Corps was none other than Dora June Wheeler of Hollis and Ocean Beach. After saving a drowning man in Ocean Beach in 1915 at age 16, Miss Wheeler went on to receive national attention when she was certified as an instructor in 1917. A memorial window in the Free Union Church on Ocean Breeze, where the Wheelers were members, was placed in her honor.

Hope to see you around town — and on the boat — this week. 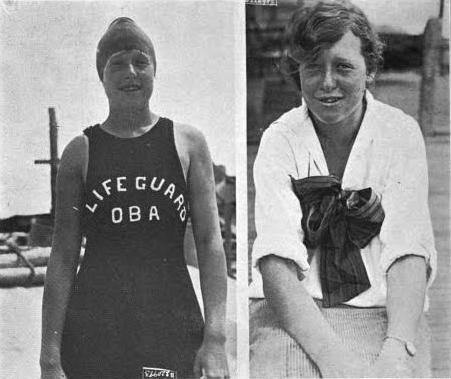 Lifeguard Dora June Wheeler in her O.B.A. uniform and at home in 1917.