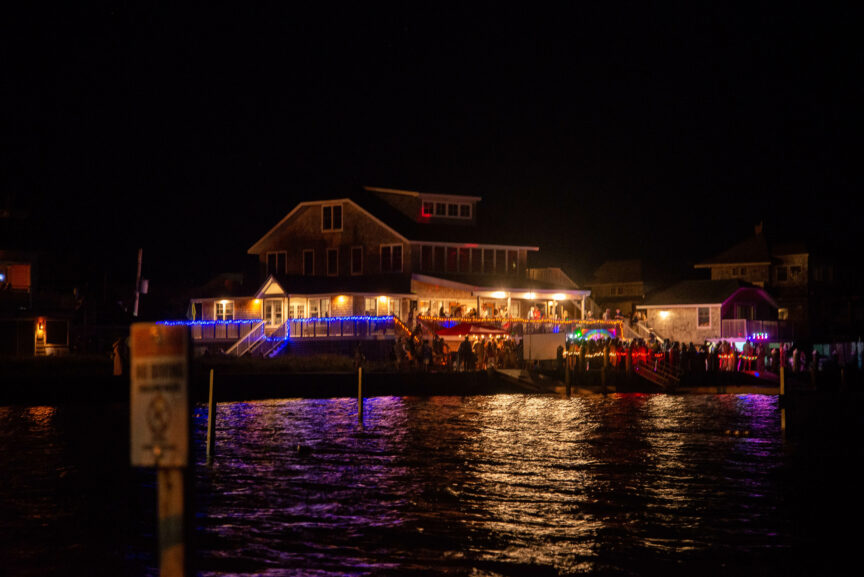 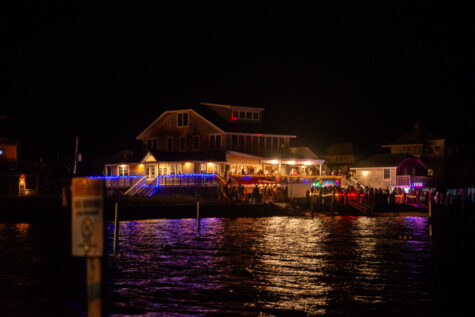 Windswept lit up for the festive occasion. (Photo by Lauren Chenault)

Days after the official 50th anniversary revival of the famed 1969 Woodstock festival was called off in Maryland, the Ocean Beach community came together in grand style for its own “flower power” celebration on the Great South Bay. The Ocean Beach Community Fund’s annual fundraising gala was held at the Ocean Beach Youth Group’s Windswept facility on the evening of Aug. 2, with the theme “Woodstock 50th Revival” and attended by more than 300 donors, many of who were decked out in their best Bohemian attire.

“We would like to thank all of our donors,” said Community Fund President Holly Etlin, “which include families from Ocean Beach and surrounding communities as well as our local businesses who gave generously this year.” The will-call table was staffed by Etlin, Co-chairpersons Rita Silver and Susan Cafuoco, Treasurer Marvin Vipler, and other volunteers.

Disc Jockey Matthew Morano, also known as DJ Phat Matt, had the packed dance floor jumping as the sun set over Windswept’s bayside deck, playing a mix of upbeat hits ranging from the Summer of Love to the present. Morano is the son of Matthew’s Seafood House Co-owner Vincent Morano, who was also present in the DJ booth. The younger Morano has provided regular musical entertainment at Matthew’s for many years. 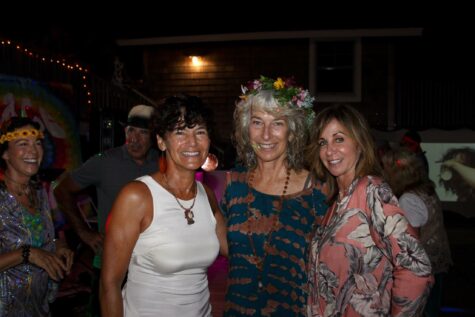 As per tradition, food and alcohol for the event were supplied by many local businesses, including every restaurant in town. A familiar sight before the event each year is a village transport vehicle making stops at establishments up and down Bay Walk to retrieve dozens of trays of food. Attendees enjoyed a buffet of diverse culinary offerings, two full-service open bars, and a clam-shucking station. Dessert was prepared by Rachel’s Restaurant and Bakery. A Chinese auction was held featuring prizes donated by local businesses and artisans.

The Community Fund exists to provide financial support to organizations and efforts in the Ocean Beach community. Past projects include restoration of the Community House and playground and the rebuilding of the facility where this year’s event was held after it suffered significant damage as a result of Hurricane Sandy. As noted by Etlin, a full schedule of free events is sponsored annually by the Fund, and the Historical Society operates largely through its financial support. 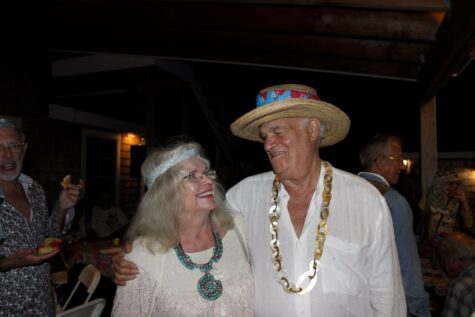 The Village of Ocean Beach recently received a $50,000 gift from the family of Joseph D. Dickey, a former Ocean Beach lifeguard, for the refurbishment of the village’s lifeguard station. The Community Fund voted to donate proceeds from this year’s gala to match this donation in Dickey’s memory. The Fund also wishes to thank the many other individual and corporate donors who have helped fund the lifeguard station project over the last year.

“They said no one would dress up,” said Community Fund Honorary Chairman John Schaffner regarding the call to dress in period attire, “but oh boy, were they wrong! Give a Fire Islander a theme and this is what happens.”

Hippie-wannabes were seen throughout town and boarding ferries after yet another successful event held by the Community Fund in support of those who call Ocean Beach home.