Saltaire Trustee John Zaccaro Jr. unseated three-term Mayor Robert Cox by a 21-vote margin in the village’s May 27 elections, which officials said had the highest voter turnout in recent memory.

Even more surprising, the highest vote getter in the election wasn’t even on the ballot. Former Trustee Hillary Richard, who Trustee Hugh O’Brien unseated five years ago, was re-elected with 223 votes as a write-in candidate. Trustee Frank Wolf was also re-elected, although another write-in candidate, Keith Stein, gave Wolf a run for his money.

“You gotta give him credit for pulling it off,” Wolf said of Zaccaro’s victory. The incoming mayor immediately organized a committee of local experts to issue recommendations on Saltaire’s financial planning options.

“We will look at all the options that we have on the table,” Zaccaro, who’s served five two-year terms as trustee over the past 16 years, told the audience at the village’s Memorial Day board of trustees meeting. Zaccaro is the son of the late U.S. Rep. Geraldine Ferraro (D-Queens), who was the first female vice presidential candidate on a major party ticket in 1984.

Zaccaro, who was sworn in at the meeting three days after the election but didn’t officially take office until June 6, got 178 votes to Cox’s 157. Stein drew 114 votes, coming within striking distance of unseating Wolf, who beat his challenger by 79 votes. Another 20 write-in candidates were also listed among the results, although few got more than one vote each.

“I felt like the community needed somebody to serve, I’ve served before and feel like I know how to do it and the timing worked out well,” Richard said, noting that both Cox and Zaccaro asked her to run. Although she said in 2011 while running for her third term that it would be her last, this time she did not limit herself. “I have a lot more flexibility now,” she said.

Cox was disappointed that his 12 years in office – six as trustee followed by six as mayor – didn’t end on his terms, but as he handed the reigns to Zaccaro, Cox remained proud of his legacy of leading the village’s Sandy reconstruction.

“Having grown up a Boy Scout, one of my mottos had always been try to leave the campsite better than you found it,” said Cox. “I think I can walk out with my head high that I feel that I left Saltaire in better shape than I found it.”

Village finances were the prevailing debate in the mayoral race. Saltaire recently borrowed more than $5 million to fund acquiring, demolishing and rebuilding the village market, which reopened last month for the first time since the prior store was flooded in the 2012 superstorm.

To pay down the debt, the board is considering selling off village-owned vacant real estate plots. It considered a special assessment as well, but the board shot down that idea. Also helping fund the market debt is a two-percent tax increase that the board approved this spring.

The tax hike, the first in the village in three years, represents a $95 increase on Saltaire’s mean tax rate of $4,800 on the average assessed property value of $90,000, according to the village administrator. Also among the biggest off-season updates was the board appointing Joseph Lesnick to the full-time position of Security Lieutenant as a replacement for Dennis Foley, who suffered a medical emergency.

Aside from swearing in the winning candidates, discussing the transition to a new administration and recapping the market’s long-awaited reopening, the rest of the business at the May 27 board meeting was tabled. Items on the agenda that will be taken up at future meetings include a proposal to ban Segways in the village, a plan to execute an agreement for the Saltaire yacht club and market to share a service ramp and revising the plan to rebuild Lighthouse Promenade.

That project, which has been stalled due to the beach reconstruction work, will be the topic of a special meeting, Zaccaro’s first as mayor, scheduled for 10 a.m. Saturday, June 18.

“We are looking for an extension [from the Federal Emergency Management Agency] because conditions have been caused that are beyond our control,” Zaccaro said. 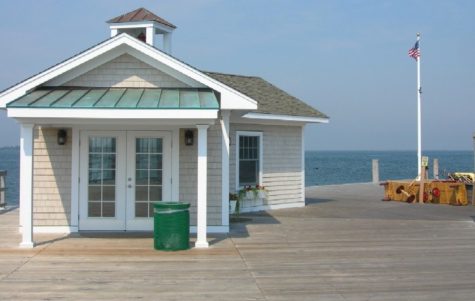